Wrapping up my blog about the tour 2 weeks after the fact seems anti-climactic. But here goes...


Once again, I want to thank Ruth for her patience and availability so that I could use her computer to keep my blog going.

Dudley, my wee moose companion, did make it into many pictures, but not so much in the blog. I make slide shows of my trips and I'll fit him in here and there.

Places we visited and made memories:

This band trip, along with all the others, was arranged through hours (and years, actually) of work by our Travel Committee: Irene Adeney, George Schmidt, and Derrick Ostner. Their years of experience create awesome trips and every more fabulous memories for the band. THANK YOU!!

Please take the time to talk to band members for their take on the trip. Although many of us shopped, visited sites, and yes, drank together, we have lots of experiences to share. A few wine tours on the way were especially memorable! We also end up having lots of recommendations - places we would return to and why.

And so ends another band trip. Thanks for coming along on this one! In a few years we will be off again to who knows where.

I'm going to share a few of my pictures of Iceland. I wrote about it in previous blogs and want to share some images.

This is the famous Blue Lagoon. The waters are very warm (but the air was not that day!) and is very popular for it's soothing, relaxing, effects. 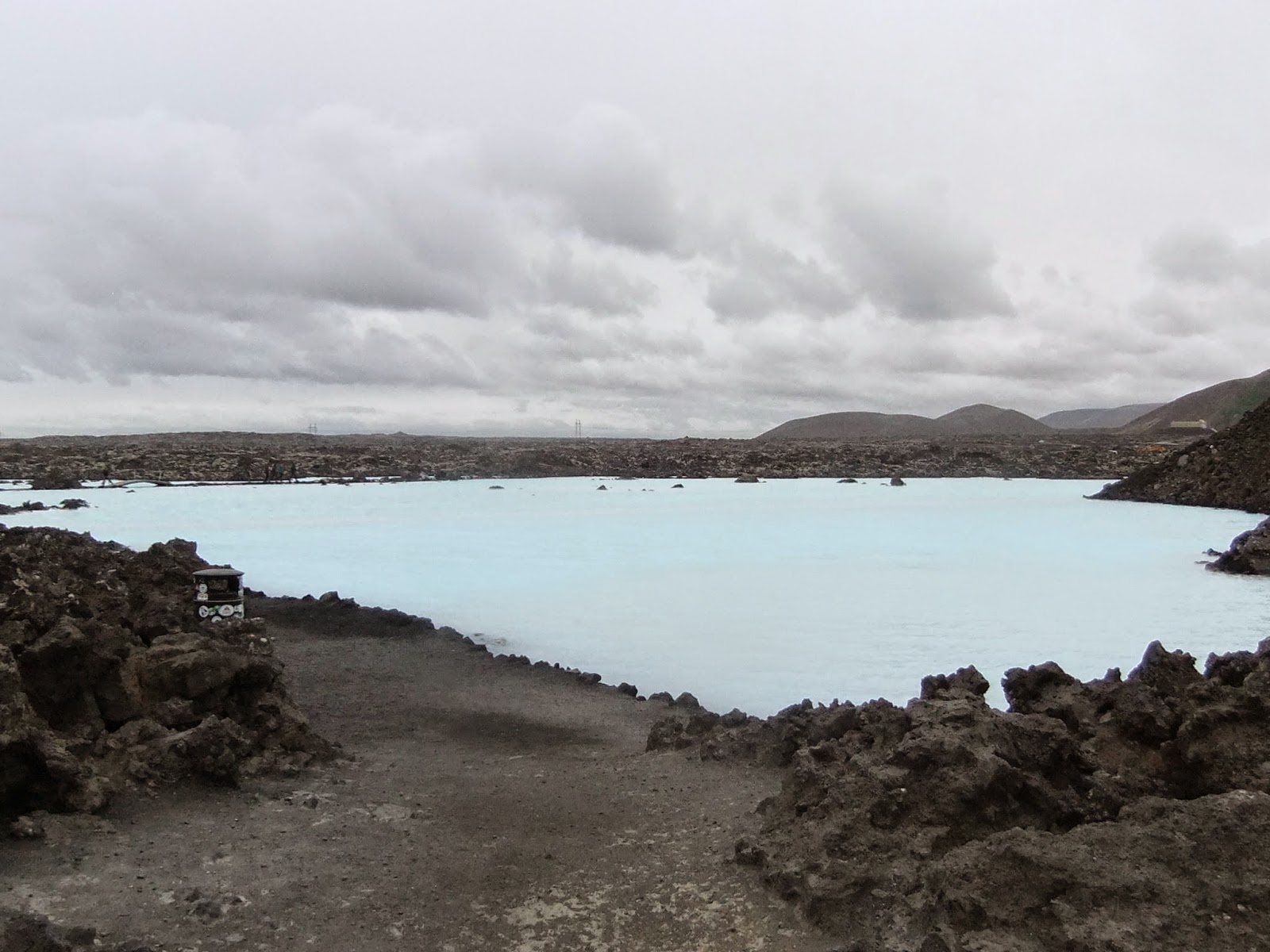 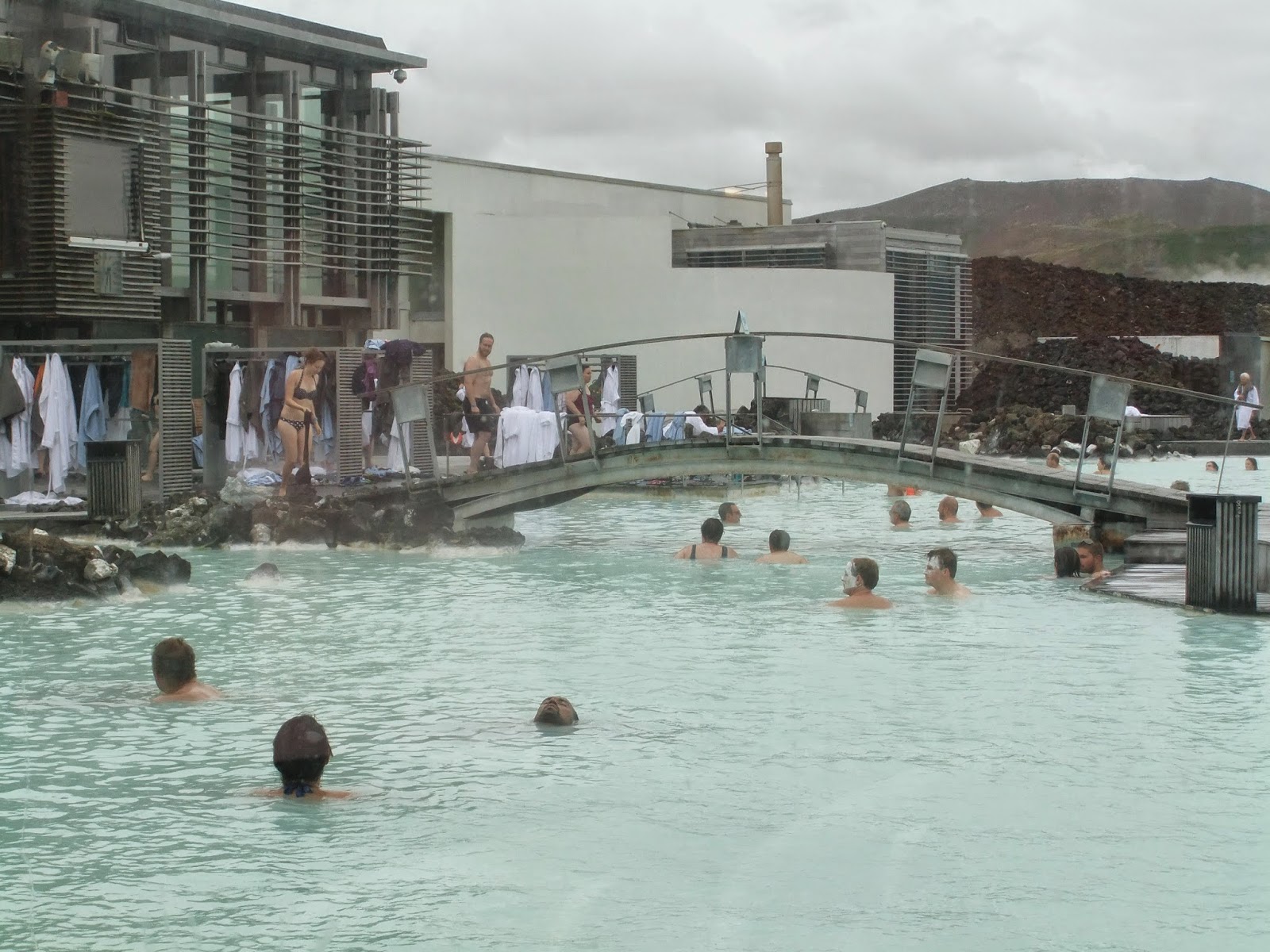 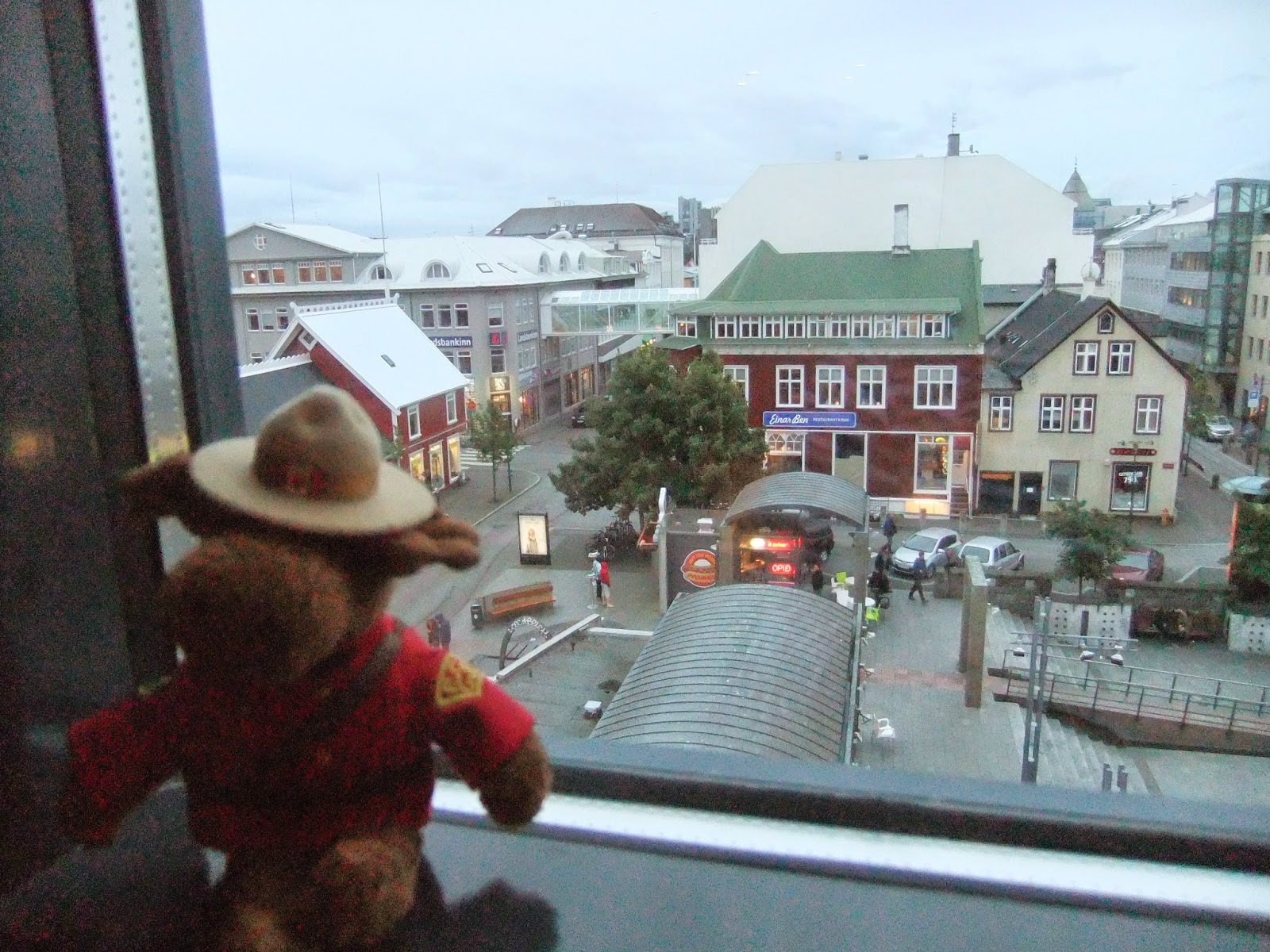 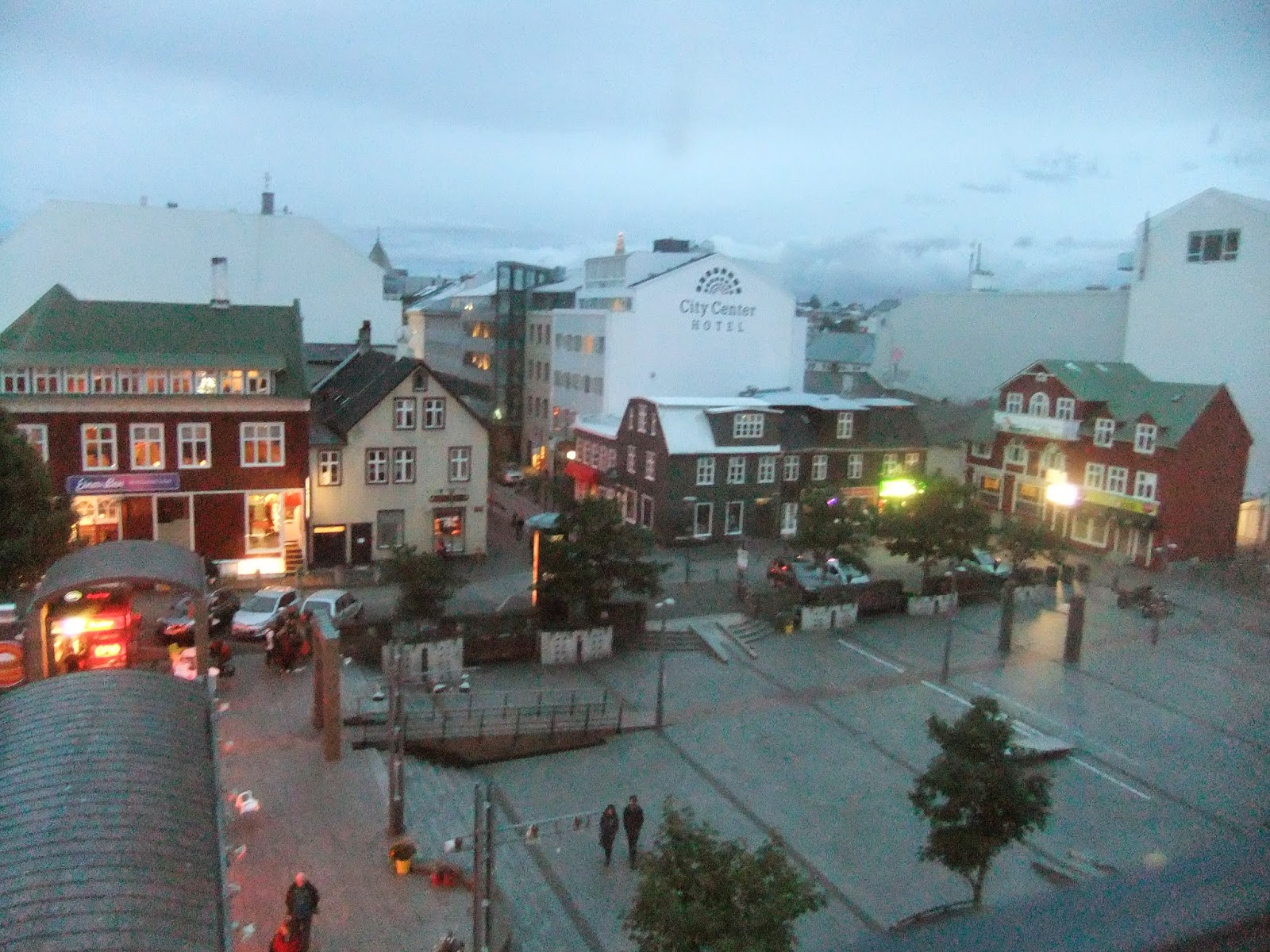 This is a photo of the famous puffins that are found in Iceland. We went on a boat tour and got fairly close to them. My little camera doesn't do them justice, though. 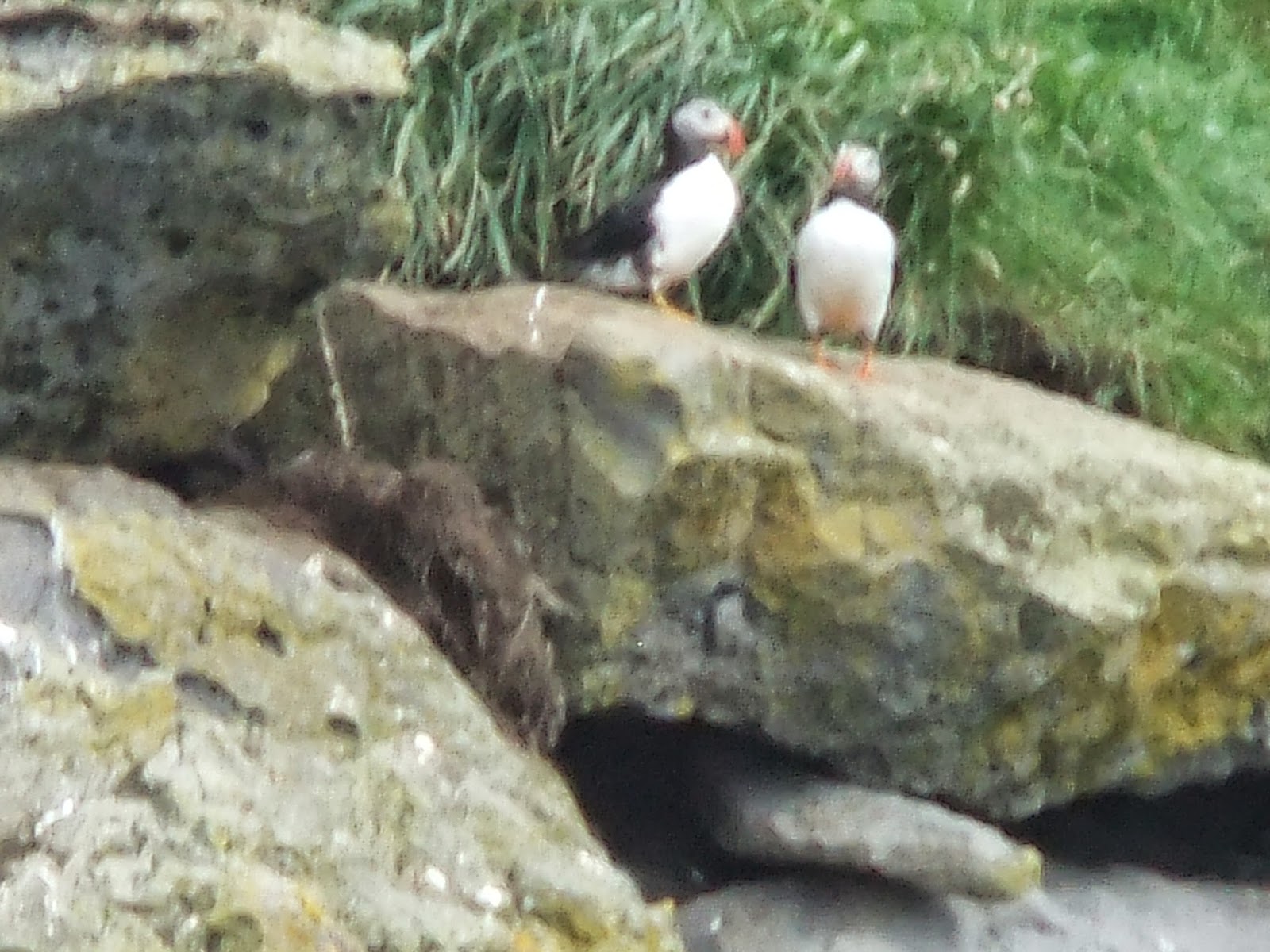 The following pics are from our Golden Circle tour. I recommend that you Google that so you see the area that was covered in this 8 hour trip.

This is the American Rift. The other side is the Eurasian Rift. They are along the major fault line in Iceland. They are separating at a rate of 1cm per year. Iceland averages 2 earthquakes per week! Many are small enough that you don't feel them. 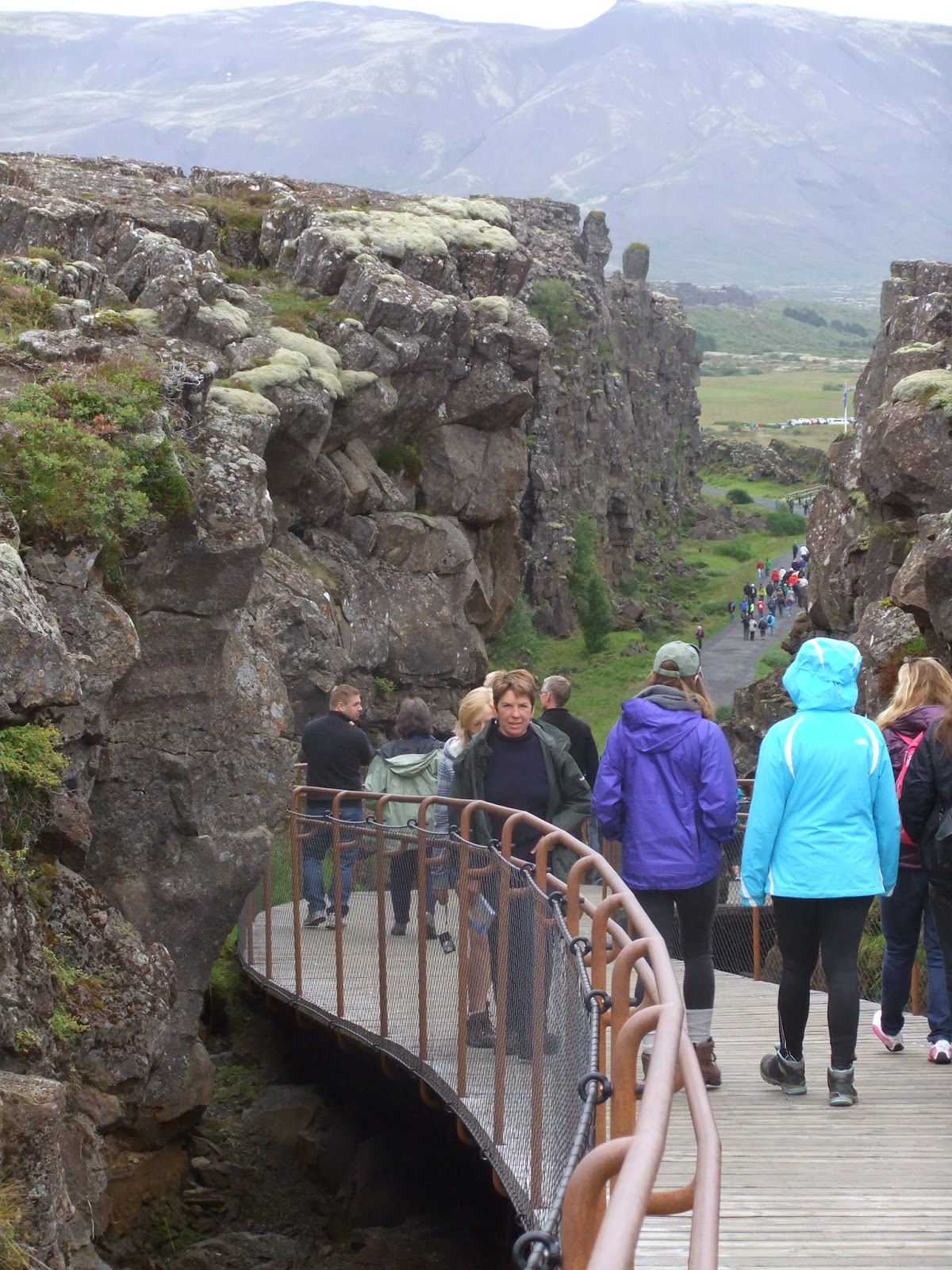 This is a photo of one of the many areas around Iceland that have steam rising from the earth. It's really neat to see! 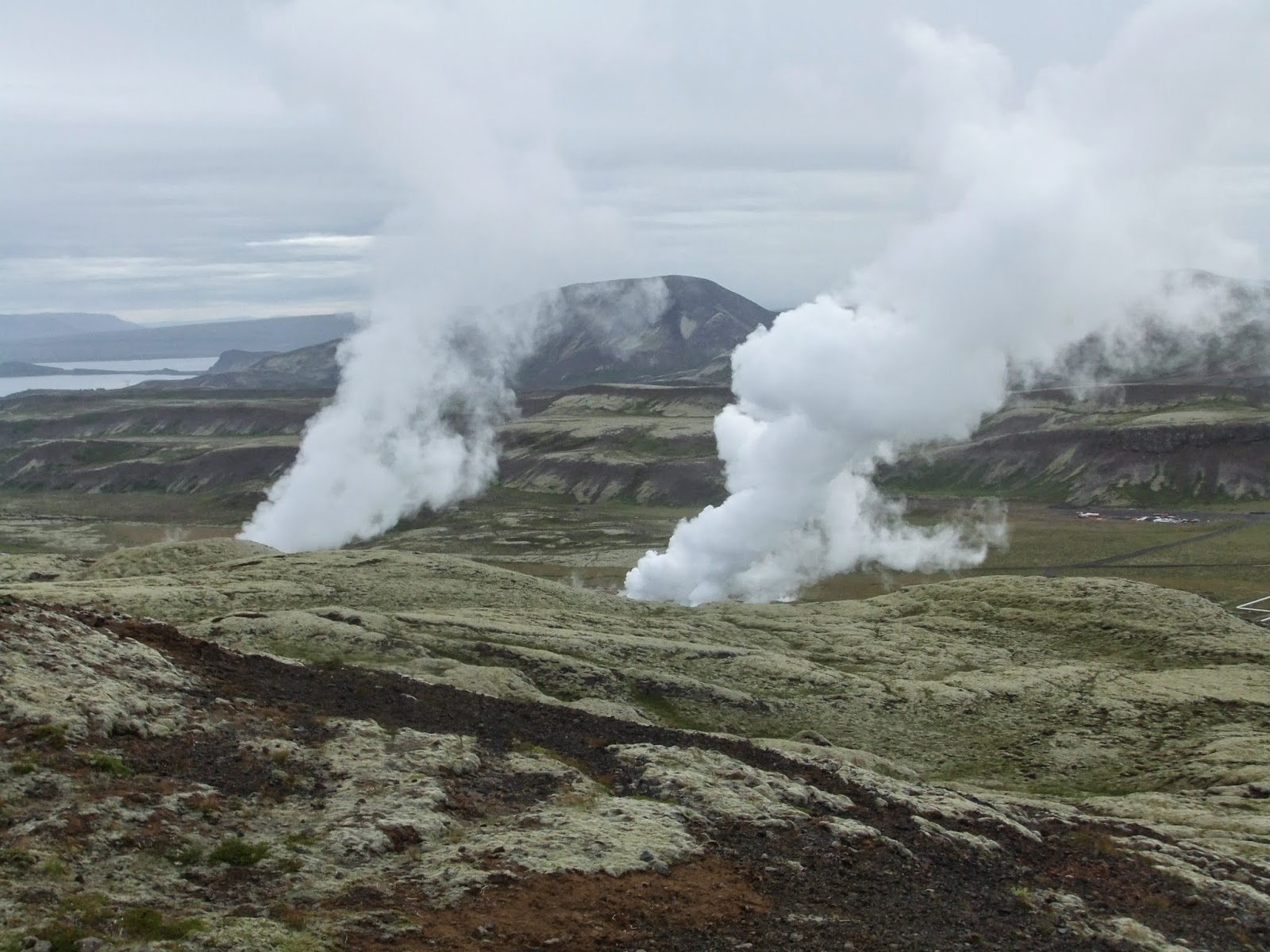 Ah...the geyers! This was really interesting to see. All the tourists were ready with their cameras to catch when the big geyser would blow. It did so every 4-5 minutes and I managed to get a few good shots. 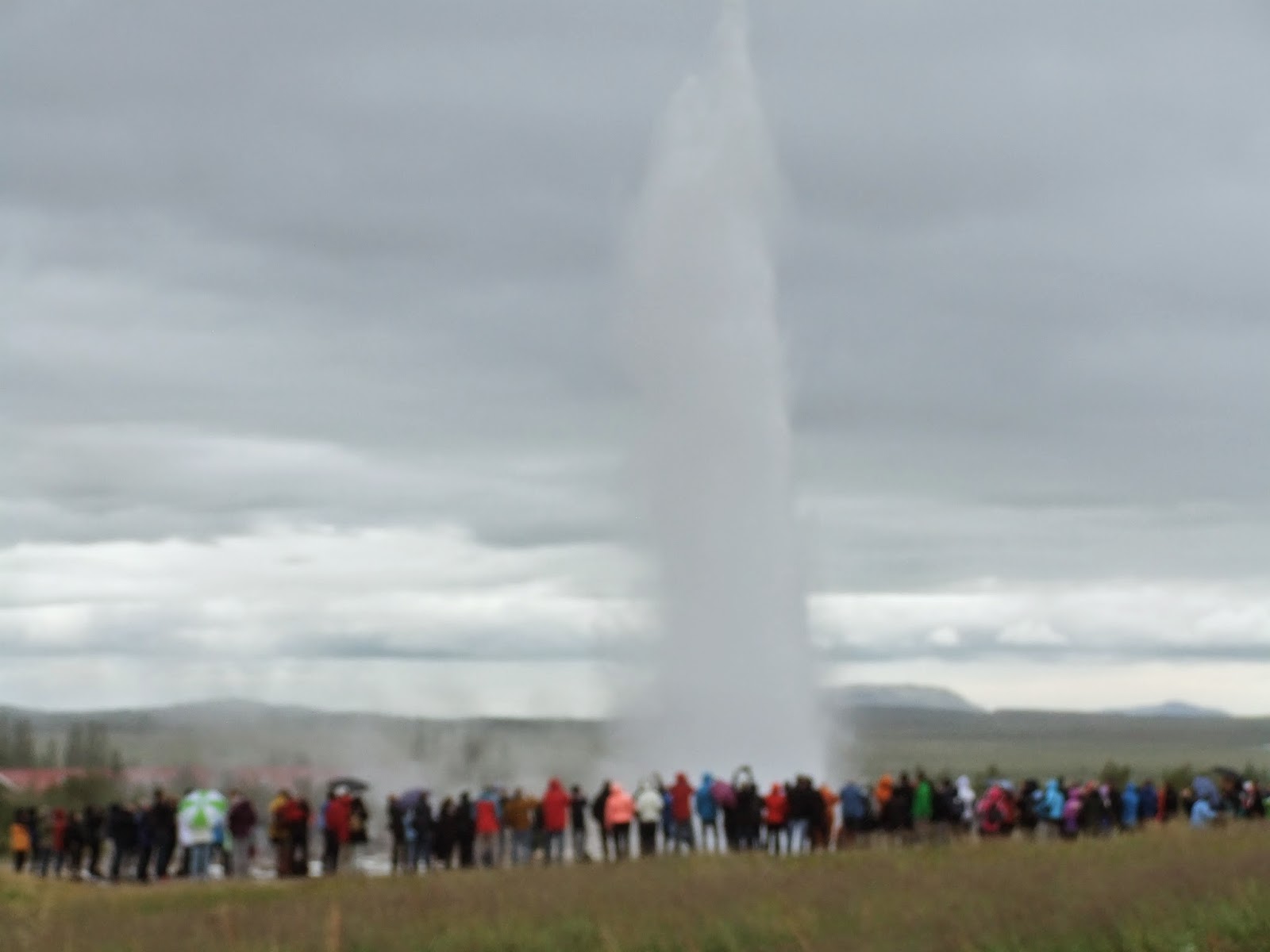 I'm sorry to say that I don't remember the name of this waterfall, but it is the largest in Iceland. Very impressive. I chose not to go down further for a better photo - is was very misty/wet (like Niagara Falls) and very chilly that day. 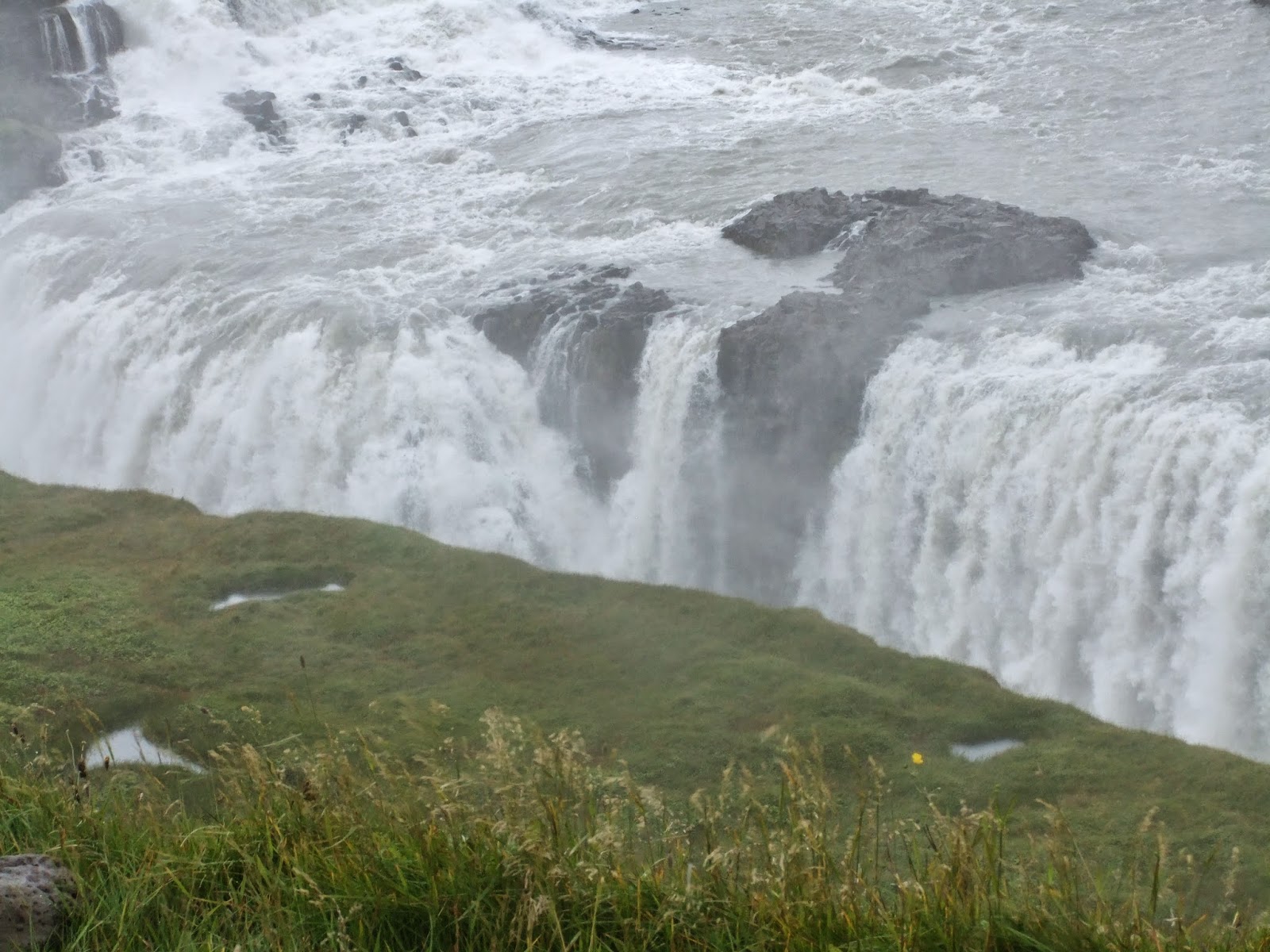 My motto in life is, "You can't get what you don't ask for." We were sitting on a bench in the pedestrian shopping area of Reykjavik, enjoying our gelato. I happened to say out loud, "Wouldn't it be nice if someone took our picture?" Well, a guy on his bicycle heard me, stopped and got off, and took this picture for us! (l-r: Wendy, Heather, me, Dawna) 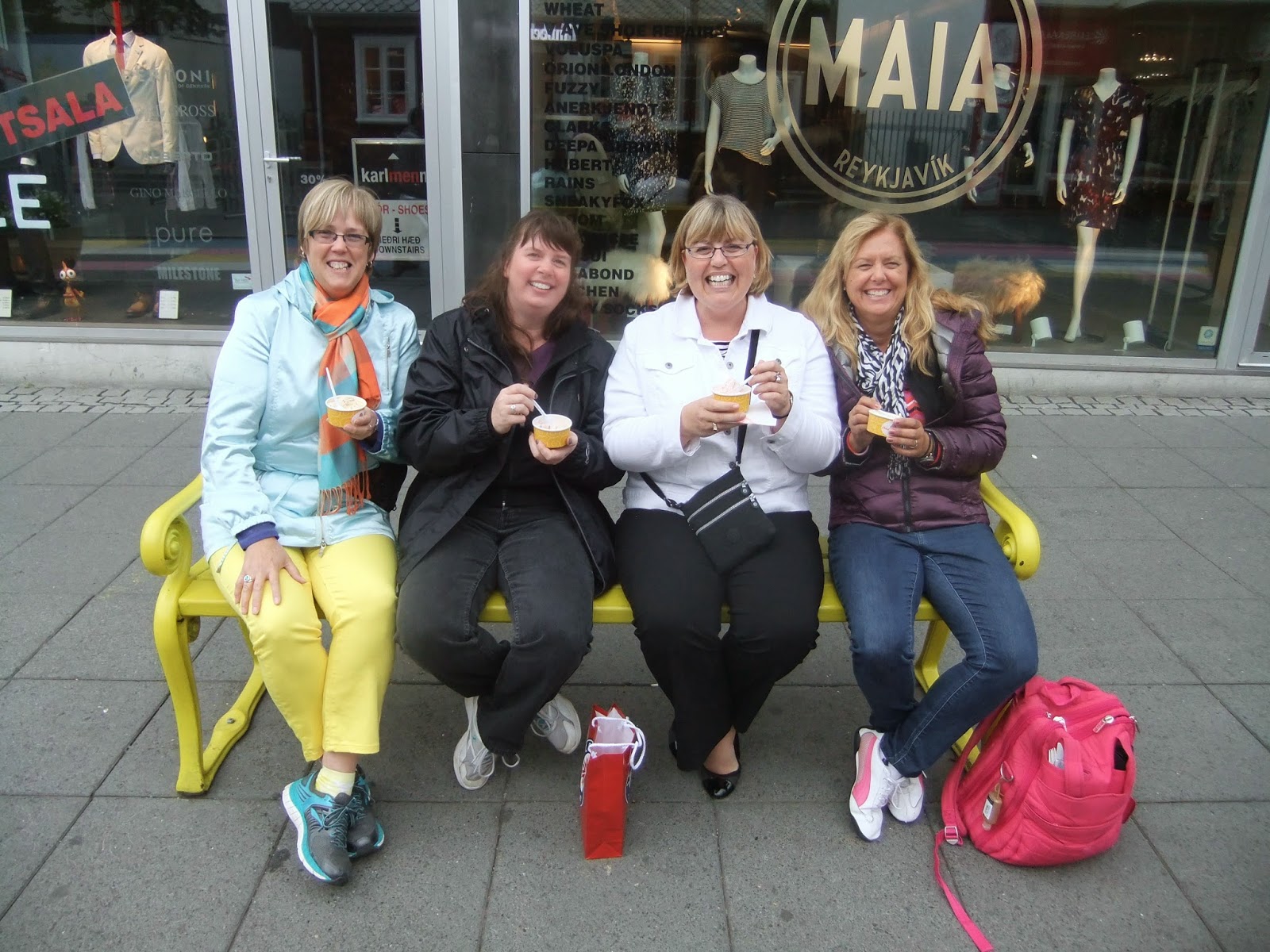 That wraps up the Iceland portion of our trip. I'll write a bit more to finish everything off, in one more blog.

I want to give a big shout out to Ruth Letson! She graciously allowed me to use her computer during the trip so I could download (upload?) pictures and type with her nice keyboard. We encountered Internet connection problems along the way, but managed to keep things going.

I misjudged the disconnecting of my camera and lost all my pictures! OMG!! However, because I'd been putting them all on Ruth's computer, the pics are all safe! But...Ruth's enjoying an extra week in Ireland with Diane and
won't be back til Sunday. When I
reconnect with her I'll get my pics back and finish my blogging.

All my pics of Iceland are on my camera and I'll get that going soon, too. Just need to get myself organized (and back from my aunt's cottage!!).

So, to all three of my fans (does my sister count?) I will wrap up soon and will move on.


Posted by Unknown at 8/08/2014 01:50:00 PM No comments:
The Golden Circle! What a tour! It took us eight hours to travel around the small, southwestern tip of Iceland (at the peninsula where Reykjavik is). The terrain is very stark, but beautiful. Lava flows are what the ground is formed from. When I get to a computer, I'll share my pictures - you'll need to see it to know what I mean.

We saw the largest geyser in Iceland. The fun was waiting for it to blow so we could get it on film. It usually erupted every five minutes or so. We were actually quite successful.

We also saw a huge waterfall (the names escape me right now). There was a stop at the largest geothermal power plant in the world. All residents in Reykjavik get HOT water into their homes from the thermal springs. It's VERY inexpensive.

One of the coolest things we saw was the rift between the American fault line and the Eurasian fault line. We stood right on the rift and walked around them. Awesome! The rift spreads apart 2cm each year.

Caught a brief glimpse a volcano far away. The big one that blew in 2010 is very far away. There are two that are long overdue to erupt. There are also a few small earthquakes every week. Cool!

We are here at the wrong time of year to see the Northern Lights. It needs to be dark and clear skies - we don't have that right now. Too bad.

That's about it for now. I'll wrap things up when I get home. We fly out at 5pm tomorrow - Midvikudagur (that's Wednesday for those who aren't fluent in Icelandic!).

Posted by Unknown at 8/05/2014 07:00:00 PM No comments:
Reykjavik, Iceland. Beautiful - lava covering the land and yes, they do have trees! Took a boat tour today and saw puffins. They're small birds that have similar colouring to penguins. The puffin is famous here - our tour boat was named Lundi, which means puffin.

Everything is VERY expensive! We knew that coming in, but it's still a shock to see the prices. We managed to find a reasonably priced burger joint and ate our supper on the waterfront.

Our city tour took us all over - to neighbouring towns/cities that are all considered part of greater Reykjavik. We went to the President's home - the flag was flying, indicating he was home. Even though there was absolutely no security in sight, we did not pop in for a visit. Reykjavik's crime rate is very low - no need to protect the president. Hmm...

Everyone speaks English here because they learn it in school. That's very helpful when shopping. Television is also all English - a bonus, considering the other countries we visited
had very few English channels.

Heading out tomorrow on a bus tour of the Golden Circle. It's an all-day excursion and we'll visit geysers, waterfalls, and maybe get close(r) to a volcano. Oh ya...we have a glimps of a huge glacier out at sea 150 miles away. Neat!

Almost all Icelanders actual DO wear the famous Icelandic sweaters! There are definitely a lot in the shops for sale. I knit them myself, so I'm not going to buy one. The temperature here ranges from 0-23 degrees celcius, with very little snow! So, considering the name of this country, it's not the winter wonderland you'd expect. This summer for them has been rainy and colder than usual. Not a problem if you're prepared for the weather. Oh ya...the wind is wicked! It makes the rain fall sideways. No kidding! The houses have protection on the sides to help prevent damage.

Oh ya...it is daylight very late here. I'm too tired to see past 11pm, but it is still daylight. Close the curtains if you want to sleep!

OK...I think this is the longest post on my blog so far, but this is a very interesting country and I wanted to share some info with
you. No pics, as I'm not on a computer to download them. I'll add some when I do my final blogs.

I'll leave you with the only Icelandic I know so far - tak, which means thank you.

Munich is a great city. Many of us did so much shopping we don't know where we'll put it all! A lot of us bought Birkenstock sandals because they are half price or less here. Some dirndles and lederhosen will also be packed in our suitcases.

We walked around the centre of the city and ended up at the Marienplatz. This is famous for it's chimes and the picture below shows the tower. Everyone stares up as the chimes play and the figures move around. It's pretty cool - a must see. 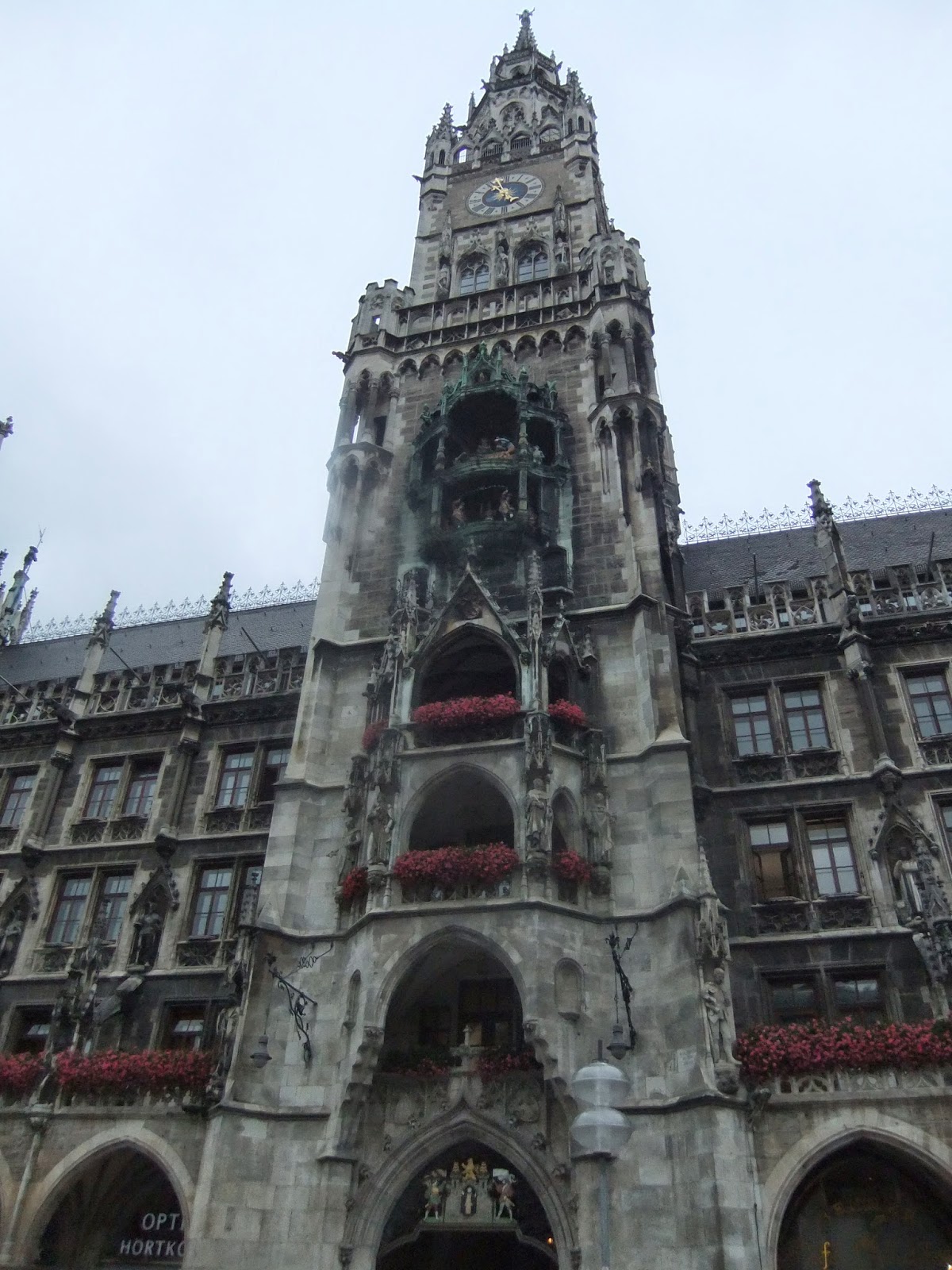 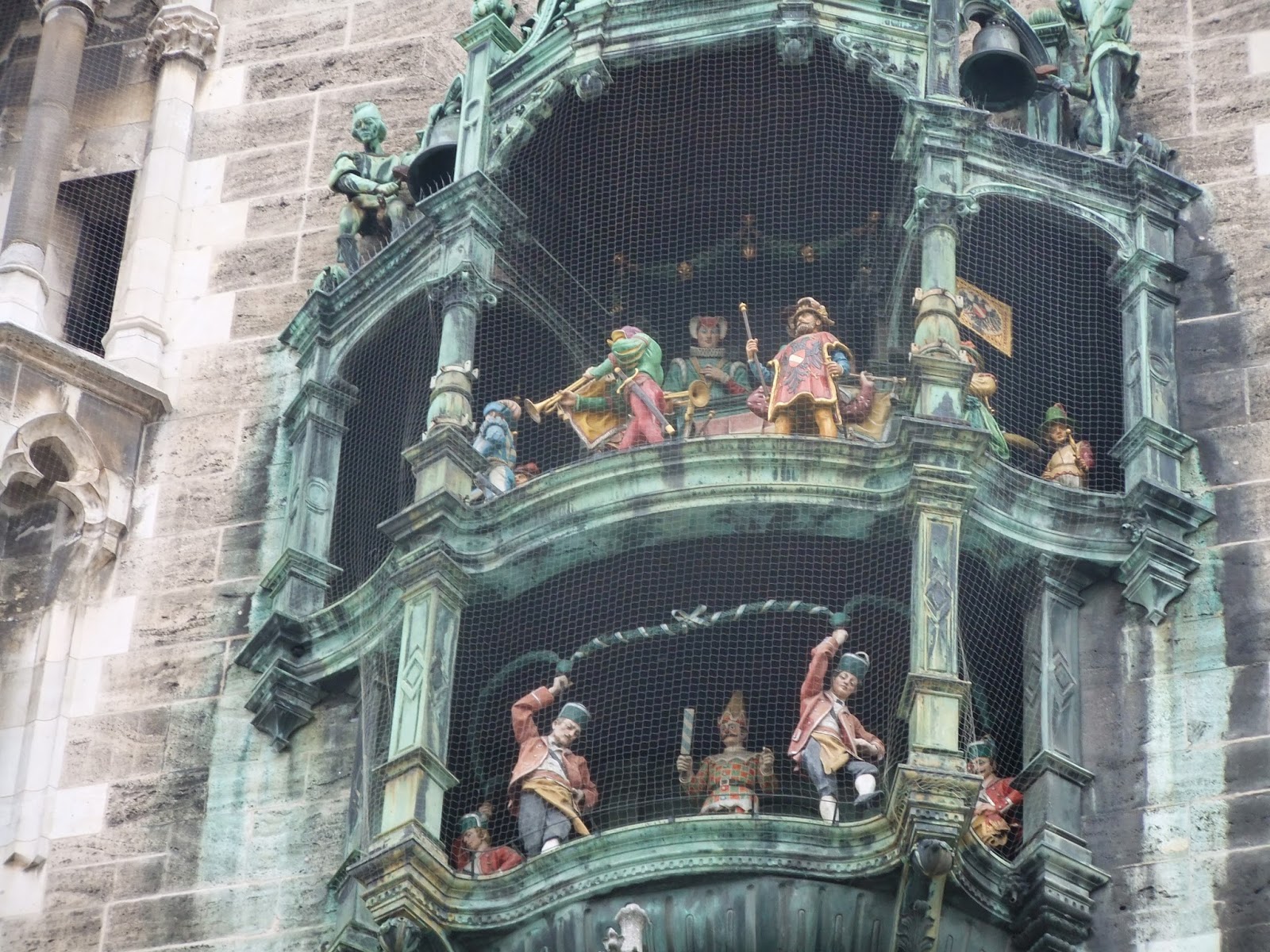 We played a concert in the middle of the Neuhausstrasse, a pedestrian shopping area. We had to have official police permission to play there. Not only that, we had to have our tour guide introduce our performance and close it. Hmm...interesting. The police officers were quite happy, though, to get their picture taken with a fellow police officer, Dudley. He is wearing an RCMP uniform, if you noticed. 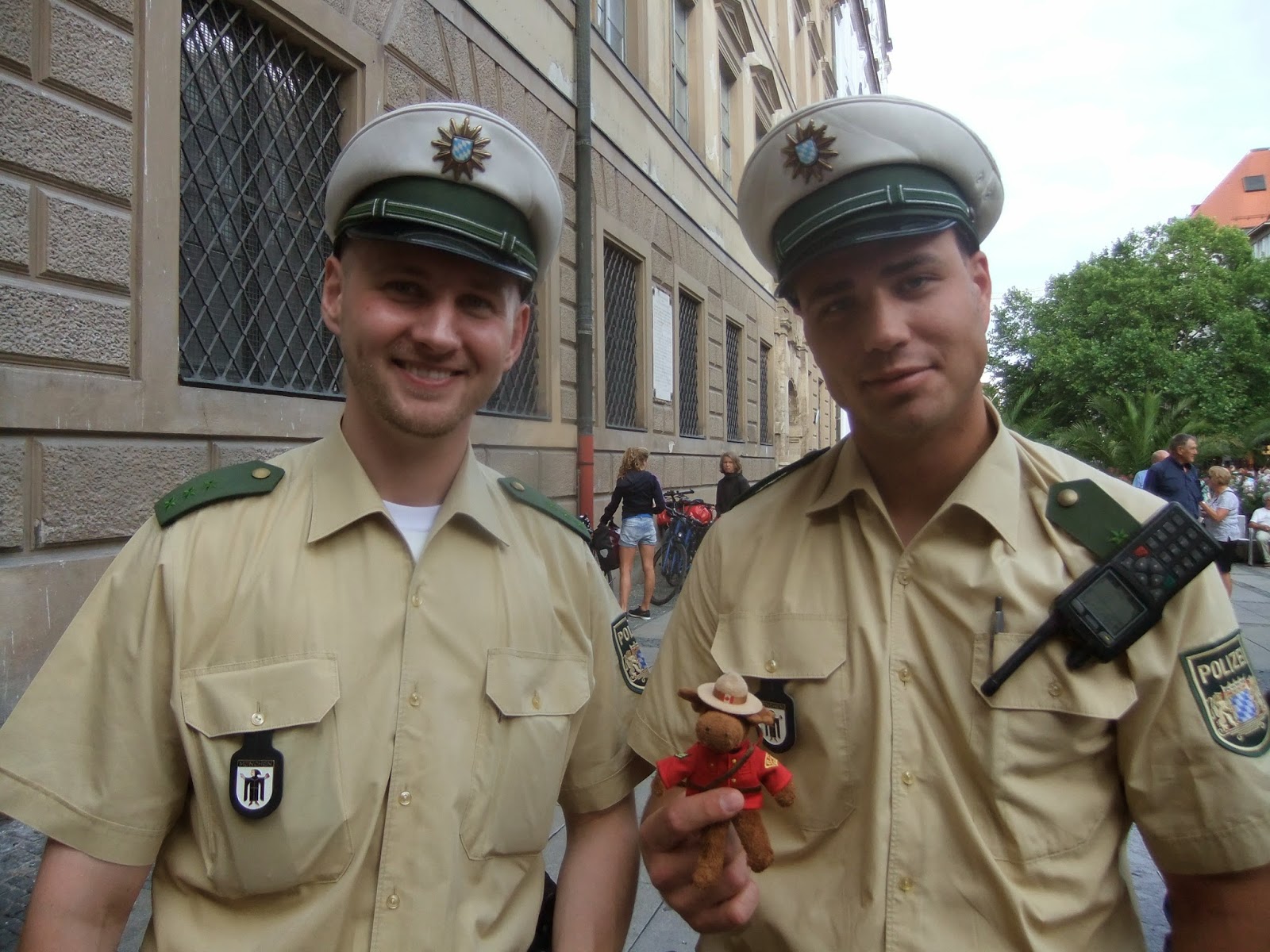 We finally had another schnitzel dinner. We went to Markt Erlbach, a town that hosted the band back in 1998. Their band and ours did a joint concert (in the hot sun, I might add!) and had a social time at dinner. On the way back to Munich, which was a 3 hour drive, we had a great time on Das Party Bus! "Unicorn!!" (ask me later!) 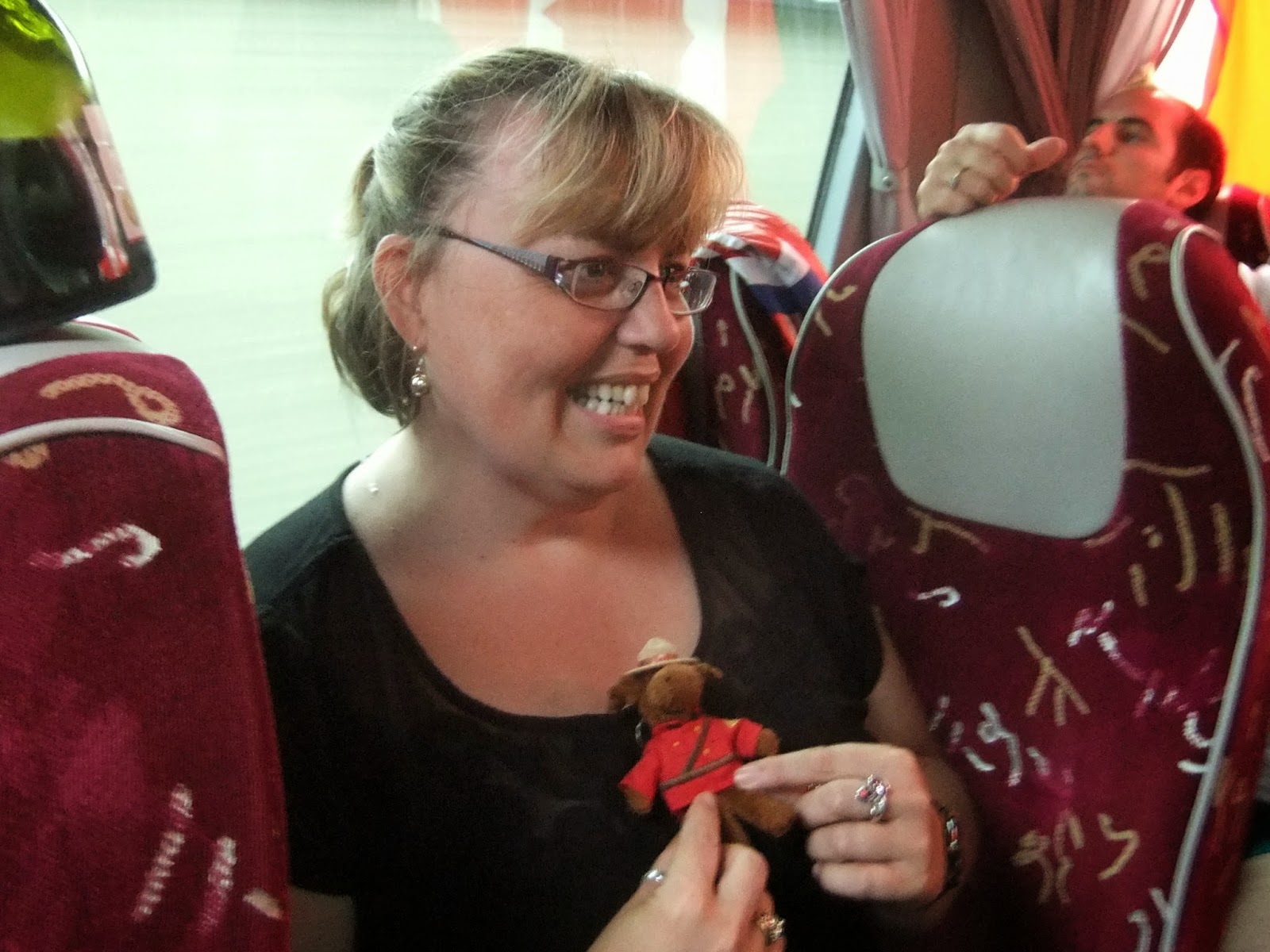 Here is Mike giving the accordion a try. He didn't sound too ... bad. Really. We need to get that instrument embedded in the band! 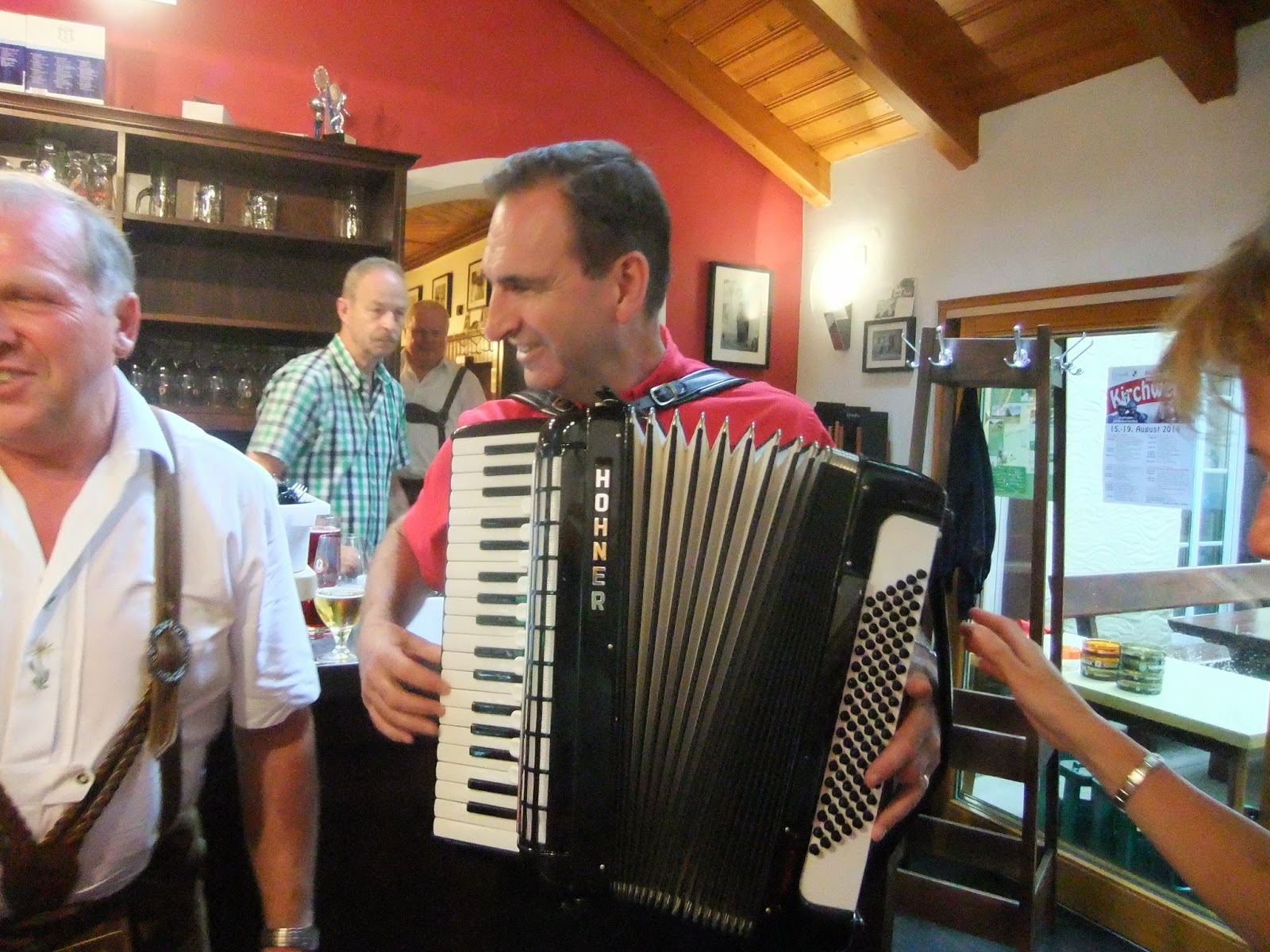 That's about it for now. I will try to write while I'm in Reykjavik, Iceland. I'm staying there for three days with a few others, while the rest either go home or to other locations. If I cannot write, be assured that I will continue/finish my blog when I get home.

It's been fun trying to capture some of the adventures of the band (and Dudley). I hope you have enjoyed following our trip and will consider learning an instrument (triangle anyone?) and get yourself on our next trip.

Until next time,
Cheers!

Posted by Unknown at 8/02/2014 04:34:00 PM No comments:
Ok, I would be remiss if I did not report to you the "incident" with the bus. Well...there was a low bridge, a bus that wasn't low enough, some scraping, a loud shatter, a spray of glass, a surprised busload of people, and, amazingly, no injuries! A gaping hole in the roof, followed by a great McGuyver fix-up job...well, the rest will be live on in the band folklore. 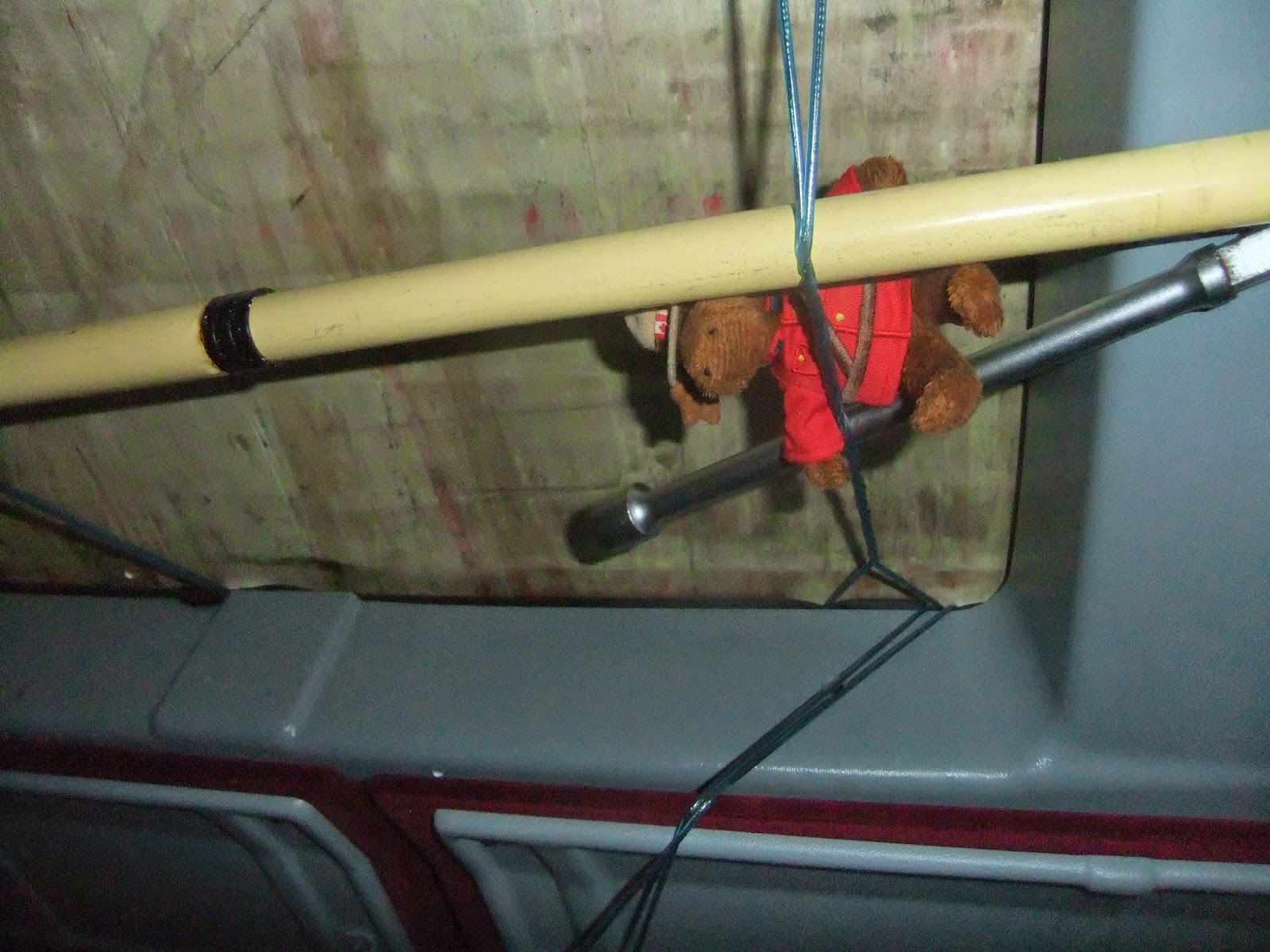 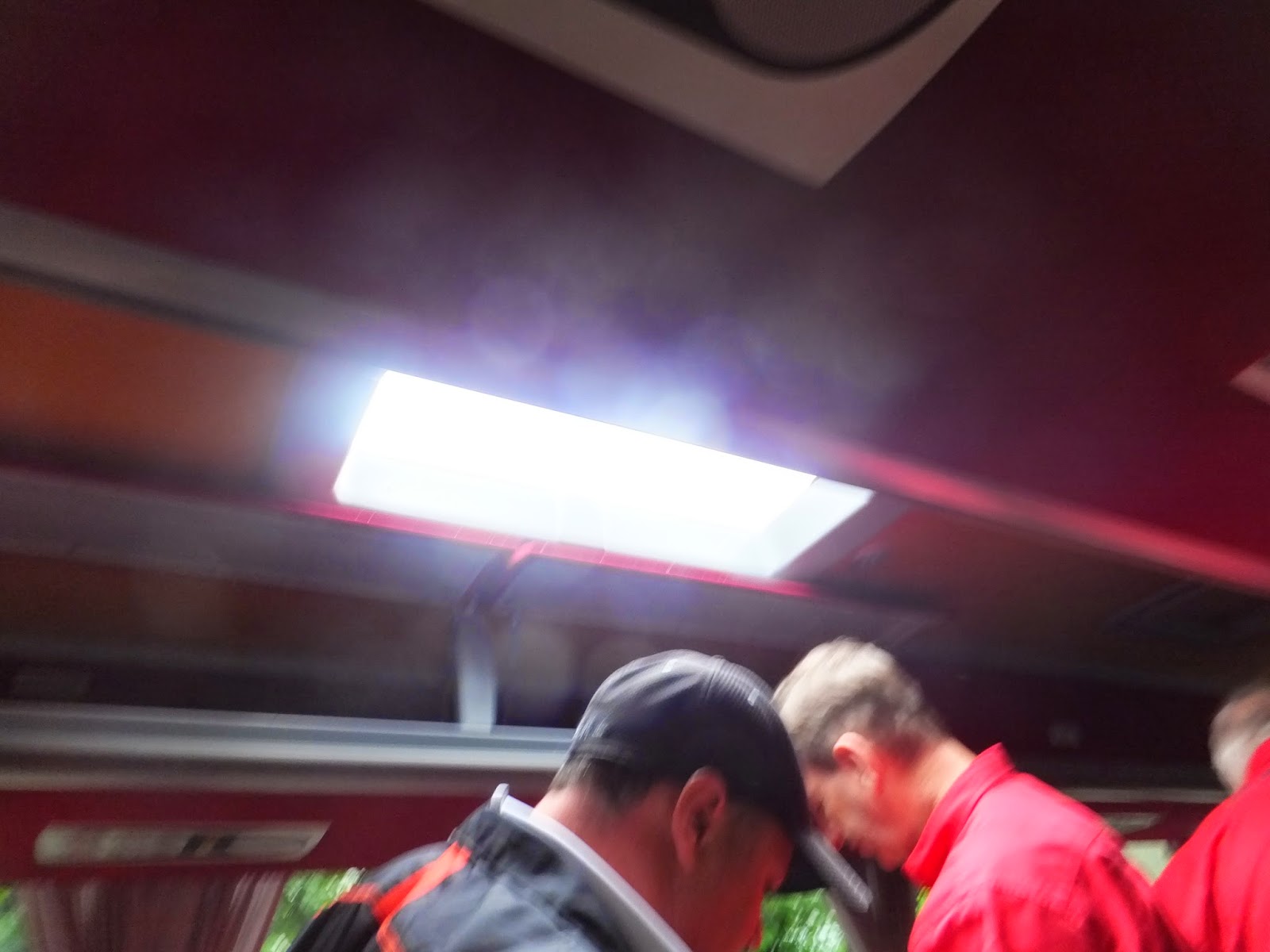